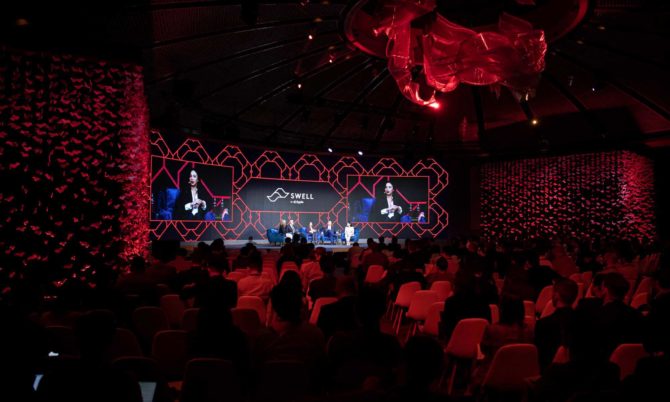 Swell is Ripple’s (Ripple is a payment provider for cryptocurrency) global payment conference, which takes place in a different location every year. In 2019, Swell by Ripple brought together over 500 of the world’s most influential people in financial services, payments, technology, and politics.
The annual financial technology conference with state-of-the-art event design took place on Sentosa Island in the Capella Resort in Singapore in 2019 and offered attendees an extraordinary architectural and digital experience.

The aim of the event was to reflect Ripple’s motto: make the world a better place. The architecturally excellent resort uses modern and individual event technology and design to represent Ripple’s elegant payment system, which heralds the new age of global payment transactions.
Furthermore, success stories and benefits from the customer’s customer (end user) were told using digital concepts and the venue was presented as a carefree zone in a time of carefree money transfer.
The participants were given a relaxed feeling in the midst of a highly technical and digital environment, just as Ripple gives its customers a secure but ultra-modern feeling in payment transactions. The complexity of the matter can be felt, but the experience is simple, impressive and calm.

The creative expression was realized through kaleidoscopic patterns and experimental interactions. The Swell by Ripple logo – geometric, angular and symbolic transformation – appeared in various environments throughout the venue to elegantly identify and define the conference rooms. Window and stairwell graphics, signposts, a free-standing anamorphic sign and gallery rooms for meetings and conversations showed a tessellation pattern of the logo.

When the guests arrived on site, they were first greeted by a “living wall” with the Swell by Ripple logo. In the lobby the participants saw an installation of block letters in which HELLO could be read from one side and SWELL from another. The custom registration table continued the design of the tessellation, with a glow from built-in LEDs designed to give the entry-level experience a glamorous, technical feel.

Over 6,000 pyramid fold, white origami in the shape of the Swell logo, hung floor to ceiling from 145 strings surrounding the main stage. The strings were intentionally left lose, to allow the origami to lightly spin and sway in the air currents of the room.The white paper provided a canvas for lighting to change the appearance of the origami in accordance with the stage setting.

Let's team up to create experiences from vision to reality